Aldi is just the medicine for Fatimah 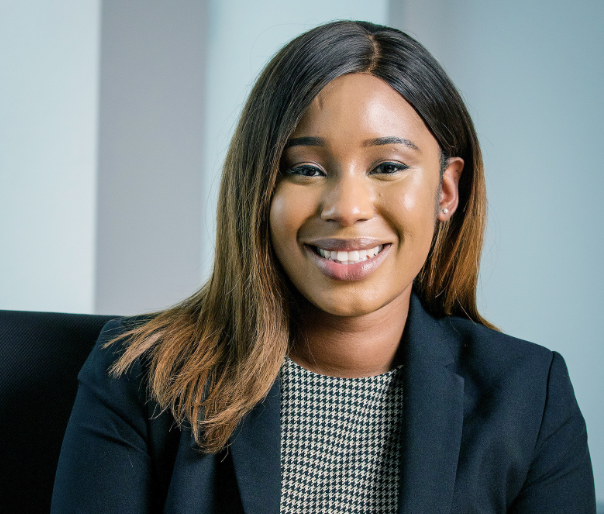 Biological sciences student Fatimah Conteh had her eye on a career in medicine until a summer job in recruitment and a love of dealing with people led her to join Aldi’s Graduate Area Manager programme.

Eight years later, Fatimah’s decision has paid off. She’s now a Store Operations Director overseeing 21 stores and is part of a team responsible for growing the company’s operations in the Greater London area. That’s not all, she’s soon to embark on a new journey as one of Aldi’s Group Buying Directors in our Buying Department in Atherstone.

“The amount of training and support I’ve received has been amazing, and there’s no limit to what people can achieve at Aldi because the company is always growing and opening new doors.”

But her decision to join Aldi wasn’t an expected career path.

As Fatimah explains: “My family is from Sierra Leone and working towards a career in medicine, law, or engineering, for example, is seen as the ultimate goal because they are well-respected and highly-paid professions."

“I had to explain to my family that the Aldi graduate programme offered just as much, if not more, opportunity for career development. At first, they didn’t understand the scale of the business, what the brand stood for, the credibility of the role I had been offered and the progression opportunities. I’m the type of person that if you tell me something’s challenging, whether that’s the job or just convincing my family this was the right route to take, then I want to see if I can do it.”

Fatimah was given opportunities from day one at Aldi. “As an Area Manager, you are challenged but given lots of support and feel like you are able to make a real difference in a number of ways; you can make a direct impact on the commercial performance of the business through the multiple stores you manage. The sales and efficiency at each store contributes to the overall success of the company and it’s hugely rewarding when you’re able to make improvements.”

“You can also impact the business by recruiting and developing great people. When I think back to my fondest times as an Area Manager, it was when I saw someone progress in their own career with my support. It has been really rewarding to see people evolve and feel rewarded by their own development and success.

“You’re able to achieve both personal and professional successes through a great support network of Area Managers and Store Operations Directors, but also by being given autonomy to implement things as you see best within the parameters of your role.”

On her current role, Fatimah says: “One of my biggest responsibilities is recruitment for our expansion in London. There are lots of store openings planned for the coming years, so that keeps me busy and is great because I love interacting with the wonderfully diverse array of people that come to work for Aldi.”

Fatimah is also responsible for the operational functions of the Aldi region of Sheppey (covering the South East and Kent), which was officially created in March 2019. With the Store Operations, Logistics and Trading teams all needing to work together to ensure the business runs efficiently, Fatimah’s operational skills are very much in demand.

“It’s important that you set the right culture from the outset for an Aldi region,” continues Fatimah. “Given we’re a relatively new regional team we’ve got a few quite inexperienced team members, so a key focus of mine is to support and coach my store management team, encouraging the sharing of best practice to ensure success in all of their stores.

“Understanding the size and scale of the task, establishing the best course of action, and putting processes, deliverables, outcomes and timings in place, is what I really enjoy at the moment. I wanted a career where I could work with people, be given leadership opportunities and make a difference. I’ve achieved that and so much more with Aldi.”

Looking back on her eight years at Aldi, Fatimah is certain that the decision to change course, follow her gut and explore a career in retail with Aldi has given her back more than she could have expected.

Not only has she been given every opportunity to realise her potential, but she has been invested in, coached, given autonomy, been heard and well rewarded for what she has accomplished so far.

“I feel that Aldi focuses very much on what you have to offer as an individual. I think everyone feels that they can play an integral part in the business – that’s the culture that’s been fostered.  I’ve always felt the business has given me more opportunities to grow and my progression has accelerated more than I expected.”