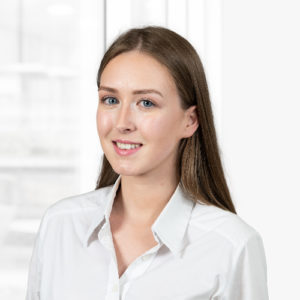 Tell us a bit about yourself

Hi, my name’s Courtney. I am originally from Northern Ireland but moved to Manchester in 2016 for university. I studied International Business, Finance and Economics at the University of Manchester and graduated in 2019 with a 1st. During my degree, I took a year out and worked at DC Advisory, following which I interned at Clearwater for a summer

What originally attracted you to Clearwater?

I was attracted due to Clearwater’s strong mid-market reputation. The two-year graduate scheme also attracted me as I saw it as an invaluable opportunity to get deal experience straight out of university and also gain a professional qualification in corporate finance

How did the intern scheme set you up for a successful career with Clearwater?

It enabled me to hit the ground running when joining as a graduate. I already knew the people and the offices working style, so I was able to get stuck into live deals immediately and work on developing my technical knowledge

How is the graduate scheme supporting your development?

As part of the graduate scheme, we are allocated a senior team member as a mentor – this has allowed me to openly discuss my goals and progression regularly, keeping my development on track.

I’ve worked at Clearwater for almost two years now and completed four deals ranging from cross boarder sell-sides to local PE investments. Due to the hands-on experience and training I’ve received during my time at Clearwater, my role on projects has developed from supporting analysis and document creation to taking ownership of workstreams and wider project management

What do you enjoy most about working at Clearwater?

The team! They make Clearwater a great environment to work and learn as they are always happy to answer questions and even happier to go for a beer after work.

What advice would you give to applicants looking to start their career at Clearwater?

Spend time to learn and understand Clearwater and the culture of the firm. To be successful, it’s important to show that you will fit the culture as well as the evidencing your technical aptitude

What do Clearwater’s values mean to you?

Clearwater’s values resonate throughout the firm. We are adaptable in the work we do and have a tailored approach meaning two processes are never the same, so you are constantly learning. The team are personable and approachable, creating a great working environment. We are committed to our clients, aiming to provide the best outcome for them and creating great job satisfaction for us

←
Prev:
Michael talks to us about what it is like to be a Partner at Clearwater
→
Next:
Where are they now? Louise tells us about her journey with Clearwater