See your career at Specsavers: From placement to permanent – how a gap year turned into a career

Krushil Shah moved from Kenya to the UK in 2013 to pursue further education and studied his undergraduate degree in Law at the University of Nottingham and master’s degree in Management and Finance at Nottingham Trent University. He joined Specsavers as a Financial Shared Services Analyst during his placement year and decided that Specsavers was the company he wanted to build his career with – and has now been with us for nearly five years!

Krushil really does have a great story to tell: while working at Specsavers during his placement year he continually learnt on the job and put himself forward for different challenges which landed him a promotion to a Senior Analyst.

Knowing how difficult it is for graduates to get a job once they’ve finished university, Krushil sat down with his line manager and expressed his interest in staying on at Specsavers once he’d completed his degree. Krushil had to return to university for four months to complete his dissertation but continued to work full-time during this period.

‘Specsavers was so brilliant. When I was doing my dissertation, they were so flexible by allowing me the time off to study.’

As soon as Krushil’s university placement ended, he became a full-time employee at Specsavers. Not wanting to stop learning, Krushil jumped at the opportunity when Specsavers offered him the chance to study for his ACCA qualification.

Being very ambitious, Krushil took on any opportunities that came his way and in 2019 he became the Team Leader for the Contracted Services team managing 3-5 people.

‘There’s always opportunities to do something different and learn if you’re interested, if you want it enough you can make something happen and that’s what I love about Specsavers.’

Krushil now works as Senior Commercial Analyst in the Commercial Finance team and his role entails assisting stores, working with suppliers and providing business insights to different areas of the business to support colleagues and the company to continue to grow. This is a secondment opportunity that Krushil decided to put himself forward for to learn a different area of finance.

As well as being supported by Specsavers to do his ACCA, Krushil has also taken his own initiative with his self-development by using the resources available on our online learning systems as well as putting himself forward to work on different projects. One project he has worked on recently was to assist a team building a tool called “Pathways”; a tool that will offer other finance professionals at Specsavers help to further their careers. While the project was completely outside of the scope of a normal finance role, Krushil loved having the opportunity to get involved in something different. When the project was complete, he was able to launch the tool across Cirrus House, our support office in Nottingham.

We asked Krushil what he would say to someone who was looking to start their career in finance at Specsavers and he said: 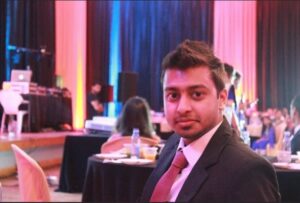 ‘Don’t hesitate, just apply and join us. It’s a company that really cares about its employees and gives as much back as you give the company and there is so much support that is provided along the way. I’ve learnt so much during my time at Specsavers. Remembering my early days as an undergraduate, my educators always told me it was about continually improving and building on the key skills that you have, and Specsavers is a great place to continue doing that. At times I’m developing my skills without knowing that I am, you learn on the job all the time. Even if we don’t have a particular role in the area, you’re looking for right now, don’t let that stop you applying as we will have it in the future. There are so many opportunities at Specsavers, you can even shadow other teams to learn about the different areas of the business.’

Krushil has one exam left to sit for the ACCA and we asked him what’s next?

‘I’ve got a few months left in my secondment role and I’m hoping to stay on in commercial finance if the opportunity arises. Only time will tell what happens, all I can do is continue to learn and do my best, then good things will happen.’

It’s safe to say that Krushil has loved his time at Specsavers so far and what an amazing journey it’s been for him. When asked to describe the Specsavers culture in one word, he said ‘Incredible’.

Specsavers are an accredited employer for the ACCA scheme. We offer Level 3 and Level 7 apprenticeships. So, if you want to study your CMI, CIMA or ACCA – we’ve got you covered.

Want to join the team and be part of our ‘incredible’ culture? Check out the latest opportunities at Specsavers here.

→
Next:
See your career at Specsavers: Rosie’s career journey from optical assistant to working in our Retail Support Team
Members only