Fabiola Gianotti.  Is this name familiar?  It should be.  She’s what one might call a big name in the science community.  She is in charge of the Large Hadron Collider’s biggest detector at the Cern laboratories in Switzerland.  This means that she heads up a team of 3000 – the team that recently delivered more data in April and June than in the whole of 2011 leading to what has been described as ‘Higgsteria’ on Twitter when she revealed they had discovered the Highs Boson particle.  In sum, she’s in charge of the world’s most important science project. 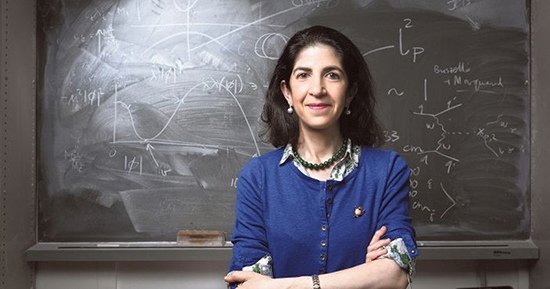 Fairly inspiring for any budding female scientists.   The problem is that we seem to be in rather short supply of those…  In the current job market there is an ever-growing shortage of women graduating with STEM subject qualifications.  29,000 men apply for engineering degrees every year compared with only 3000 women.  In the United States,  a report by the National Science Foundation observed that even girls who are good at maths show less interest in science careers.  This suggests that, for every Gianotti out there, there are many more who give up on subjects they are showing aptitude for.   Yet Gianotti has made it to the top of her field, and is involved at the highest levels in historically significant and pioneering work.   How can we convince more girls that this career is right for them?

The National Science Foundation's report suggests that fewer women pursue science careers because women are more likely to prefer work with "a clear social purpose," and "most people do not view (science and technology) occupations as directly benefiting society”.   This couldn’t be further from the truth.  According to Gianottie, one of the most appealing aspects of her job is the broader applications for the cutting-edge technologies being developed at CERN.   For example, 17,000 of the world's 30,000 accelerators are used for medical applications such as cancer therapy.  There is also the added perk of working with world-leading scientists – at CERN there are representatives from 38 countries.

Of course, not every STEM grad will find themselves interviewing to join Gianotti’s team upon graduating, but there are lots of appealing aspects to careers in these fields.  Over the past few years there have been a number of initiatives introduced to try and encourage changes within business to recruit and retain more women in science, engineering and technology.   Flexible working, mentoring, role models, transparency of pay, and structured career paths (with breaks) are consistently proposed.  But the prevailing workplace culture, and stereotypical perceptions of STEM subject based careers, appear to be putting bright young women off what could be a very stimulating and opportunistic career path.    The UK economy loses billions of pounds when qualified women scientists, technologists and engineers leave for work in other fields, or are unemployed or economically inactive.  It is precisely in the areas of science, engineering and technology that we need to develop and grow if the UK wants to remain one of the top economies in the world.

Firstly, it is clear that those working in science, engineering and technology have to get much better at portraying what they do, and show the passion and excitement felt by the contributors to this work.  It is not just about better careers guidance and more contact between schools and the world of work; it’s the need to show society just what engineers, scientists and technologists achieve.

Secondly, careers for girls in science, engineering and technology must be shown as interesting, challenging and rewarding.   Job satisfaction is more often gained in careers that are demanding and challenging.    Problem solving, influencing decisions, contributing to genuinely useful projects and the sheer pleasure of working with interesting technologies all play a part in these fields.

We need to spread more widely present good practice, to understand better the causes of the skills shortages, and to tackle the difficult area of cultural change. Without recognising the importance of workplace culture, we will have to be content with the current glacial speed of change here.  We need a new generation of scientists, engineers and technologists of both genders to ensure we remain a topflight developed economy.

→
Next:
Why women are less confident and what we need to do to change that