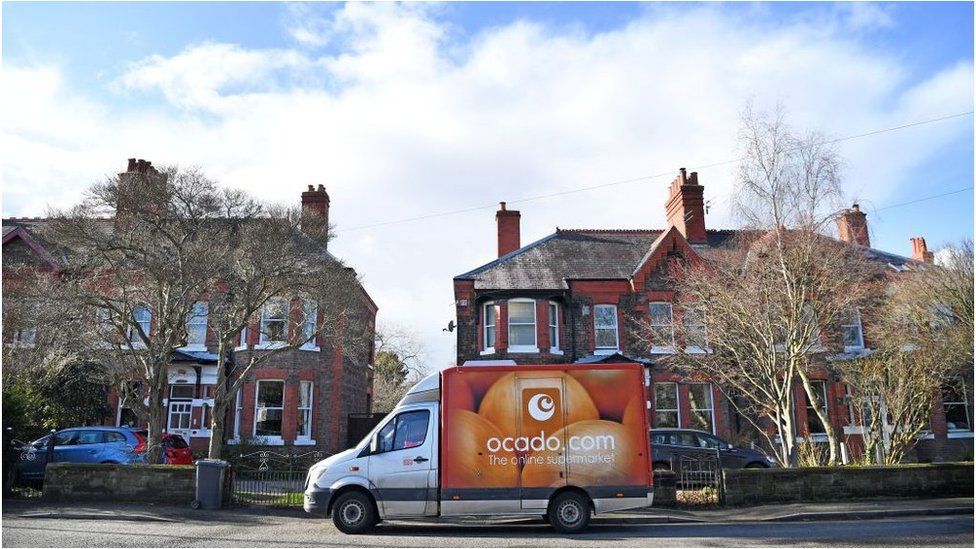 The grocery landscape worldwide is changing "for good", online supermarket Ocado has said, after a year in which the global pandemic forced many people to buy online for the first time.

Ocado's comments came as it reported a 35% jump in sales over the past year.

Amid rocketing demand the UK-based firm, which is 21 years old this year, narrowed losses from £214.5m to £44m.

The company said many customers were saying they were unlikely to revert to pre-crisis shopping habits.

Ocado's chief executive, Tim Steiner, said he wanted to "pay tribute to the remarkable work of our colleagues in exceptionally challenging circumstances".

Lockdown has thrown up challenges for all supermarkets and Ocado itself has struggled to deliver smoothly at all times.

The firm, which previously delivered for Waitrose, had to cancel some orders when its new partnership with Marks & Spencer launched on 1 September, angering customers.

That move was its most notable in the UK, but Ocado has been expanding around the world, spurred by demand for its advanced technology and robot-operated warehouses.

It has tie ups with Kroger in the US, Casino in France and Aeon in Japan, and is also planning three new warehouses in the UK this year, which will boost capacity by 40%.

Ocado has been one of the best-performing shares in the FTSE 100 in the past year, roughly doubling in value since last March.

It is in the perfect position to benefit from the restrictions put in place to control the coronavirus, with shoppers clamouring for online deliveries in order to avoid a trip to the supermarket.

These results - for the 12 months to the end of November, so not including the most recent national lockdown in England - show grocery sales up 35% to £2.2bn.

You might have thought that jump in sales would have sent the shares up, but in fact they were down - 4% - in early trading.

Investors have looked past the headline sales number to see another pre-tax loss for the year - £44m. That is not so surprising in itself, but shareholders would also have noted the projected increase in capital spending, which will rise to £700m in the coming year.

Ocado is spending heavily not only on technology, but also new warehouses. Shares in Ocado have always priced in the promise of future profits, and today's numbers made that promise seem that much further off.

Ocado said in its full year statement on Tuesday: "The pandemic has accelerated the rate of channel shift to online.

"Online grocery market share in the UK has nearly doubled over the last year to 14%, according to Kantar. Similar trends are observable in the United States as well as many other countries around the world."

Ross Hindle, from research firm Third Bridge, said: "These are not just results, these are remarkable results. Ocado couldn't have asked for better trading conditions.

"The M&S partnership has, so far, proved positive for Ocado, with management highlighting that access to M&S products is now higher than the benchmark Waitrose set."