Graduate insight into an internship with Lloyds Banking Group

Huge congratulations to Ayotunde who secured an internship with Lloyds Banking Group this summer. We caught up with him in his 9th week to find out how his summer internship had gone so far. In our catch up he told us all about the work he'd been doing, what he had done to get there and his Krispy Kreme charity initiative! Why did you apply to Lloyds Banking Group?

I went to a Lloyds presentation at their headquarters in London when I was in my second year of university. In the presentation they gave us loads of information about their company and the internships and graduate schemes they run. After listening to their presentation and hearing about their fantastic programmes I was convinced Lloyds was the programme for me.

It was actually quite a short application process. We had to submit an application form and then complete a few online tests. After this I had to complete an online video interview. The online interview wasn’t between me and another person. Instead, I had to record myself answering questions and then send Lloyds the recording. The question would pop up on the screen and I would have 30 seconds to plan and prepare a response before having a minute to record my answer. There were 10 questions in total. It was actually after this online video interview that I found out I had got the job.

What did you do on your internship?

It was a 10-week internship running from the 25th June to the 31st August. It has been hard work at times for sure, but I also feel that I’ve been given a great insight into the roles and responsibilities those who work in banks. Also, everyone has been really friendly and pleasant to be around which always makes your time much more enjoyable. I worked within the market data team for the majority of my time there. We were given two tasks to complete over the course of the internship. Our first task was to prepare, plan and deliver a presentation to a group of senior colleagues. We were given a case study to present and 5/6 weeks of preparation time. The second task was to come up with our own charity initiatives to raise money for Lloyds’ charity partner: Mental Health UK. We actually came up with the idea of selling Krispy Kreme doughnuts around the office and then we also held a raffle with like Nando’s and Wagamama’s vouchers among the prizes.

Did you find the Bright Network FESTIVAL useful?

I thought the Festival was very useful, absolutely. It was a very special opportunity for me to talk to loads of different companies. I don’t actually know of any other events with as many top-flight firms present. I also took advantage of the How to: talks. I particularly enjoyed the How to: Interview and How to: Network talks, they gave me a lot of tips and advice for my application processes. I would highly recommend the event.

What three tips would you give to new interns? 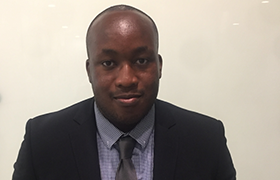