Dominic has just started a placement year with the Bank of England and came into the Bright Network office to collect his Champagne. We had a chat to find out how he’s finding it, what he’s learned, and what advice he’d like to pass on to other Bright Network members. We started by talking about The Bank of England, which Dominic said had a group of “welcoming and friendly people”, eager to help him learn and progress in his career. They understood that interns didn’t necessarily have vast amounts of knowledge stored up, so didn’t expect too much too early. He was expecting quite a sharp transition from university life, but said that the people at the Bank were still really interested in helping him to learn. He told me there are "multiple online, Excel and programming courses which are encouraged. There is also great scope for doing secondments in different divisions".

He was also finding the networking opportunities invaluable at the Bank of England, and emphasised the importance of that for Bright Network members. Dominic was particularly impressed by "the number of interns at the Bank compared to other financial institutions. It's very sociable as there are lots of people of the same age". Finally, he mentioned it was great that the Bank were keen to use the skills he had learned in his Economics degree, but that his degree subject was not of paramount importance. "It doesn't necessarily matter what your degree subject is", he said "rather that you ensure you show financial interest".

Dominic then told me a bit about the application process for his placement. He had applied to quite a few different firms, and so getting the Bank of England acceptance was a bit of a surprise. “It began with general online tests – like many of the big firms the Bank use these tests to make sure you’re the right sort of person for the role. I’d done quite a few by this point so wasn’t too phased by them. This was followed by an invitation for a video interview – again I’d done several so it wasn’t too daunting, but the first one you do can seem a bit strange". The application process concluded with an assessment centre, where he had one interview followed by three group sessions, which tested a variety of his skills and knowledge – including questions about how the Bank might deal with a crisis and his opinion on the best course of action.

His main advice for Bright Network members was to conduct in-depth research into the firms you’re applying for. He said that it was “no good applying to fifty different firms if that means you can only do a small amount of research into each one. It’s important to strike a balance between applying to enough to give you a few interviews, and still being able to do a good job for each one. In the interview, I was also asked questions which required knowledge of the Bank’s core values and goals for the business, so you need to make sure you’ve researched those”. Finally, he pointed out that trying a few different sectors was a good idea. “It’s really hard to know what you want to do so trying out a few different places and keeping an open mind is good, but it’s definitely worth doing some research and having a rough idea of the sort of career you might enjoy.”

Thanks so much to Dominic for sparing the time to have a chat to us. If you want to find out about the sort of career you might like to do, why not have a look at our Career Path Guides? 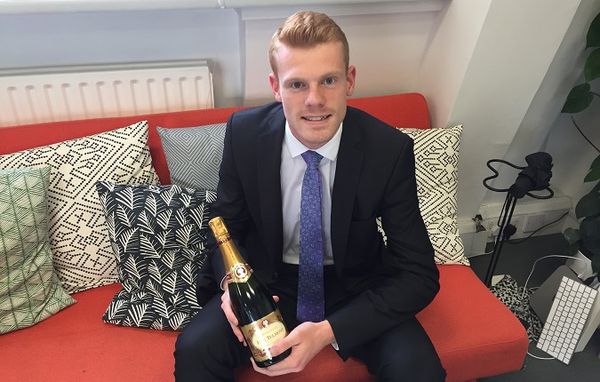