Graduate insight into securing an internship with Visa

We caught up with Alex after he attended our Diversity and Inclusion event to find out how he managed to convert his rejected application with Visa into a fantastic internship! Here's how he did it...

1. What attracted you to the role at Visa?

I was particularly drawn to the Sales and Solutions Internship at Visa because I was interested in developing further my skills in sales and negotiation, through opportunities to support senior sales staff in their pitches and negotiations to financial acquirers and merchants all across Europe. There are not many companies in the world with such global reach and scale as Visa, so to learn how the best in the industry develop and strengthen relationships with the world’s biggest financial players, whilst continuing to transform payments globally across the world, would be an opportunity too invaluable not to pursue.

Also, I felt that everyone is very familiar with the internship programmes at the Big 4, the investment banks and large FMCG firms like Unilever and P&G, but an internship at Visa struck me as a road less travelled. I saw it an opportunity to work with one of the strongest and most well received brands in the world, which the Visa team at the Bright Network Diversity & Inclusion event (D&I) reaffirmed. Everyone I met spoke with such enthusiasm and energy about their role and the company and I just knew from that moment I was determined to be a part of it.

2. You attended Diversity and Inclusion, how did that help you in your career?

For me, the Diversity and Inclusion event was massively influential for two fundamental reasons. As for many people that I met on the day, the Diversity and Inclusion event was my first experience of professional networking outside of a university campus environment. Naturally, I was both excited and quite nervous about what to expect and how the day would unfold. Turning up to the event by myself, and with nothing to lose I approached the first two people I saw and introduced myself. I instantly clicked with them both, as we took time to share and learn about each other’s backgrounds and ambitions.

With feelings of such inclusivity and positive energy, the networking itself felt effortless and fun, and for me this was one of the greatest benefits that D&I produced. It was a platform which enabled me to meet many likeminded, aspiring young professionals, from a diverse range of backgrounds and educations. D&I gave me the confidence to continue going out of my comfort zone and attend more networking events of the sort in the future.

D&I also massively transformed my summer this year, and my career respectively. The event created opportunities for dialogue with dozens of class-leading organisations, and whilst the event served as a great opportunity to learn about these companies in the flesh, it also importantly provided companies with an opportunity to learn a bit about people as well; this being the real you, not the version of you on a cv or a phone call.

Through this initial dialogue I was fortunate enough to have my application reviewed again and turn what was originally a declined application into a renewed job opportunity; which I was able to then convert into a place on their summer internship programme. A milestone in my career for which I only have the BrghtNetwork to thank.

3. Your story is very motivational, how did you manage to convert your role at Visa?

Just days before D&I I had learnt that my application for Visa had been rejected quite early on in the application process. I was particularly disappointed as I was essentially knocked out at the screening stage. However, knowing that visa were being represented at D&I gave me a renewed sense of optimism, as I thought that if there was any chance I could influence the outcome of my application then this would be the opportunity to do so.

After researching the company extensively beforehand and preparing some thought-provoking questions that would help me stand out in conversation, I was able to have a really meaningful and engaging discussion with Visa’s talent team; learning first-hand about the company, what their culture was like and more about the intern programme. I also made sure that in moments of self-reflection, any quality that Visa established they were looking for in a candidate, I made into an opportunity to relate this to myself or my experiences in order to align myself with Visa’s values.

I left my email address after what felt like a really successful conversation and sent the recruiter an invitation on Linkedin to reaffirm the relationship established earlier that day. Weeks later I still hadn’t heard anything, but then finally I was contacted about a phone interview offer. From that point onwards I was able to build upon the positive momentum that began at the networking event.

Three months later, I am now mid-way through my summer internship at Visa; a fantastic forward-thinking company who are heavily invested in me and my personal development.

4. What 3 top tips would you give to fellow Bright Network members? 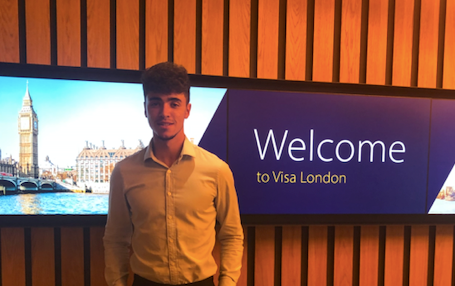