“Fatigue” is the word of the week. Leveraged finance has been on a tear since the beginning of the year, with 146 EUR/GBP HY bonds and Lev loans printing. We’ve spoken about welcoming conditions, and issuers have clearly taken advantage in droves - hoping to match demand with fresh supply.

So how have these instruments performed? 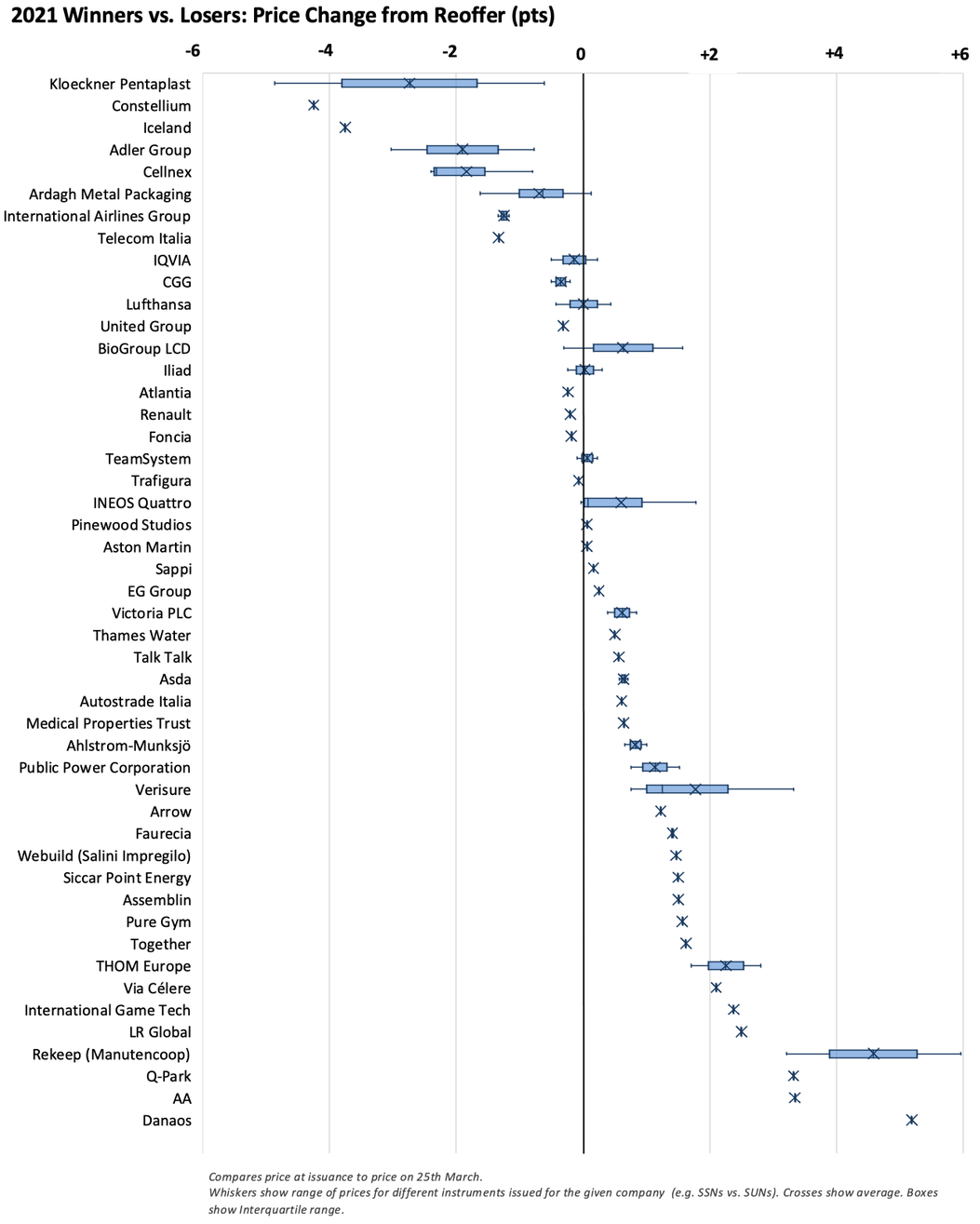 Consumer Discretionary names are the clear winners, trading up an average of +1.7 pts since issuance across 16 different instruments. Rekeep 2026s were up at around 106 on Thursday, while Verisure continues to perform, more than +3 pts over the reoffer. Financials (+0.9 pts) and Utilities (+0.9 pts) also made notable gains. Kloeckner Pentaplast holds the ignominious low (-4.9 pts on the SUNs), while Danaos, Q-Park and AA are all up more than +3.0 pts.

By rating, steady BBs were fairly flat, up just +0.1 pts, and CCC names saw +0.3 pts on average. Runaway winners were the Single B and Unrated names, both gaining an average of ~0.7 pts from reoffer.

Legals failed to hit the contentious heights of recent deals, however there remain some interesting elements. Most off-market is the presence of ‘no worse’ language in the Permitted Investments basket, allowing for either a leverage or a 2.0x FCCR test. Elsewhere, portability is set close to opening leverage (5.25x vs. 5.2x opening), and EBITDA add backs are uncapped, with a generous 36-month time limit.

In both a green and euro debut, aluminium flat-roller Novelis announced new financing to invest in renewable energy and pollution prevention. The US based firm priced €500m in 3.375% Senior Green Notes due 2029, which together with cash on hand will refinance a portion of the outstanding $1.8bn Term Loans. An amount equal to the offering will finance new or existing green projects.

Sustainalytics comments on the environmental benefit of using recycled metals, which require 95% less energy, enabling the same reduction in emissions. The group boasts of accounting for 17% of global aluminium supply for 2020.

Public Power Corporation, the Greek electricity giant, had a second run with its €650m 3.875% Senior Notes due 2026, announcing a €75m fungible tap on Monday. The sustainability linked notes upsized in bookbuild, and priced a €125m tranche at 100.75 same-day (B/BB-).

German shipping liner Hapag Lloyd placed €300m of its own sustainability linked Senior Notes, which priced on Friday. The seven year notes will pay just 2.5% (B1/BB), and proceeds will redeem the existing 5.125% Senior Notes due 2024.

Criticism remains over self-set targets for sustainability linked coupon step-ups, and Hapag Lloyd’s 25 bps is just half of PPC’s 50 bps. It’s worth noting that the sustainability target - of a  60% fleet reduction in CO2 intensity by 2030 - is backdated to 2008. The indicator used to track this, the so called Average Efficiency Ratio (AER) stood at 11.68 in 2008, and is expected to fall to 4.67 by 2030. However, the OM states that AER in 2020 was already 6.95, meaning the company has already achieved 40% of the target.

Group CFO Mark Frese commented “Now we need to keep our own ambitious sustainability targets for CO2 intensity firmly in sight and achieve them step-by-step”.

Freight rates have spiked in recent months, notably China to Europe routes. Bloomberg reports that the maritime cost of shipping from Hong-Kong to LA has quadrupled in the last year. Timing for the deal is optimum, and as Fitch notes, the current rates are unsustainable in the medium term.

On Tuesday the ‘MV Ever Given’ (Evergreen) containership became stuck sideways in the Suez Canal, prompting long delays in the world's fourth busiest shipping lane. Hapag released a statement today, detailing the six vessels affected, and a further six re-routed via the Cape of Good Hope.

And finally, German perfume and cosmetics retailer Douglas set about adding the finishing touches to its new capital makeup. Initially structured with €1.08bn TLBs, €1bn SSNs and a €300m PIK, the Term Loans were twice downsized, to €750m and again to €600m. The SSNs received the first boost, up to €1.33bn, but were later trimmed to €1.305bn, with the PIKs juiced up to €475m.

A hot week in primary as the market begins to wade out of the repricing bog. Four deals in the market back shareholder pay-outs and three contain a ESG ratchet. Refinancings, however, make up half of the loans discussed this week (nine out of 18), as buysiders cop to continued undersupply pressure driving nearly every deal – despite complaints over quality – to oversubscription and tighter margins.

“It’s still a bit surprising to me,” said one buysider. “So much mispricing of loans down when we’re not really out of the pandemic yet in Europe.”

“There is a lot of pressure to slip into a high margin name at the moment, to trim down on the low 300s names,” admitted another.

In this issuer-friendly environment, we see €1.09bn-equivalent in shareholder payouts in market this week, with another €2.775bn of TLs partially backing a recap.

German building and insulation material manufacturer Xella is dishing out €510m to shareholder Lone Star with its €1.945bn 2027 TLB (B3/B) following on from dividends secured in 2018 and 2019. This follows a €110m recap from another portfolio company Edilians, formerly Imerys Roofing, in February 2020. A €250m senior secured RCF and potentially €200m in PIK notes accompany.

UK life sciences group LGC, meanwhile, launched a £496m-equivalent dual-currency dividend recap maturing 2027 (B/B3/B). Cinven and Astorg bought the business from KKR with a £1.082bn-equivalent buyout loan in January 2020. KKR had itself acquired the business from Bridgepoint in 2015 for around £650m.

Belron is one of three loans in the market this week offering up ESG ratchets to green-hungry CLO shops. Another, Swedish software firm IFS, finalised a €1.2bn-equivalent TLB refinancing, shareholder pay-out and acquisition financing – this deal contains a +/-10 bps sustainability ratchet. A new $720m 2028 tranche priced at L+375 bps and a €520m 2028 tranche at E+350 bps. A €67m acquisition facility comes in at E+350 bps also. It, along with the euro tranche, have a standard two 25 bps step-downs at 0.5x deleveraging. The dollar loan has just one step down at the same metrics.

So-inclined buysiders have a smorgasbord of healthcare and pharma firms to load up with week. A total of €5.86bn-equivalent of healthcare TLs are in the market – YTD, the sector makes up 16% of euro leveraged TLs issued. This is equal to Consumer Discretionary (Verisure’s €2.8bn TLB, for example), but lower than Materials at 25% (Ahlsell’s €1.8bn TLB and Xella’s €1.954bn, for example). 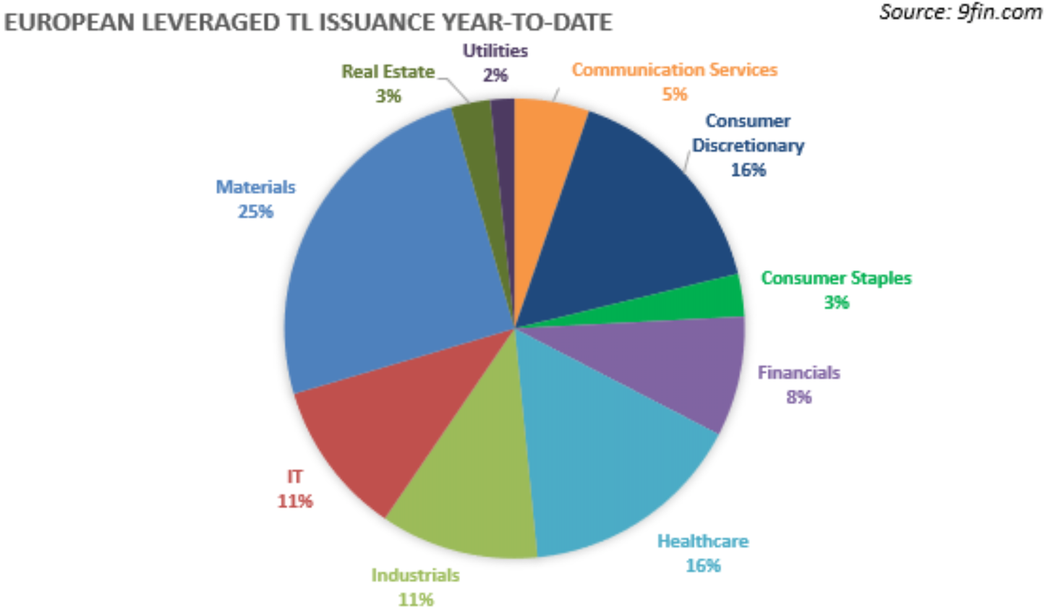 Netherlands-based Organon brings the most robust offering. An eye-catching $3bn-equivalent 2028 TLB is split between a $2bn tranche and a $1bn-equivalent euro tranche, both guided at E/L+300 bps, the funds back the standalone business. Organon specialises in medicines including reproductive health and contraception.

In France, private hospital operators are lining up for leveraged loans. Ramsay Generale de Santé’s €1.35bn refinancing (Ba3) guides slimly at just E+250 bps on a five-year tranche and E+275 bps on a six-year tranche; the tranches are split equally. Following competitor Elsan earlier this year, it is the third deal this week with an ESG ratchet, also at +/-10 bps. Almaviva Santé was also in the market this week with a €290m 2028 TLB, guiding at E+350-735 bps. This is a market in a race to consolidate, with these three operators (plus a fourth, Vivalta Santé) already controlling 60% of the market and hungry for more.

French pharmaceuticals firm Ethypharm, meanwhile, is notable for being Europe’s first leveraged loan to shun LIBOR for SONIA. The £245m TLB is guided at S+450-475 bps, while a €270m TLB is guided at E+350 bps. The transaction will close on 1st April – the date after which all new sterling loans will be required to use SONIA. The current GBP overnight rate for LIBOR is 0.04075%, while for SONIA it is 0.0481%.

Away from France, Recipharm, a Swedish contract-based firm that manufacturers outsourced drugs, is out with a €1.115bn TLB to back its purchase by EQT. Guiding at the tight end of E+350-375 bps, it accompanies a £228m pre-placed second lien and a multi-currency $353m-equivalent RCF. Sponsor EQT acquired Recipharm in December 2020 at a $2.8bn valuation – a price that one analyst told Bloomberg looks low.

Finally, price chatter on UK-based Advanz Pharma swung wide, now E+500 bps on its €305m 2028 TLB (B3/B-). In another sign of investor reticence, call protection was doubled to 12 months. Funds back its acquisition by Nordic Capital, which releverages the name. Formerly Concordia, Advanz Pharma was delisted from Nasdaq in 2018 as part of a debt restructuring.

In other new deals:

Following Monday’s roll into series 35 the iTraxx Crossover was quoted at 268bps, settling slightly since the beginning of the week (272). The indices biannual redetermination saw a 30 pt jump versus Friday, largely due to upgrades out of the index, which were replaced by illiquid bonds.

Playing Chicken with the King

Once penned as a sure restructuring candidate, Boparan pulled off a relative coup with its par refinancing in Nov-2020. The group announced mixed Q2 results on Wednesday, reporting revenues down -3.3% YoY, (LfLs were up +2.7% after adjusting for the disposal of Fox’s biscuits and excluding ongoing sales in Uttoxeter).

The Fox’s disposal helped the group fund a capital structure reshuffle in Nov-2020, cutting debt by around £250m. However the marketed net leverage of 3.3x has since jumped back to 4.8x for Q2. Like for like, the core-focus poultry section grew +6.9% YoY thanks in large part to volume gains, although EBITDA dropped to just £3.8m, with COVID, bird feed inflation and continued closure to Chinese exports driving margins to just 0.8%. Management described these as “temporary headwinds” in the call, with margins expected to improve in Q3.

As part of the Poultry Plus pivot, further disposals of non-core segments, namely the Pastry business remain on the horizon - “we’ll sell when we believe the value is right… it’s not right at the moment”.

The new 2025s dropped almost four points on the results, although the bonds have since recovered to 98.4 by Friday afternoon. 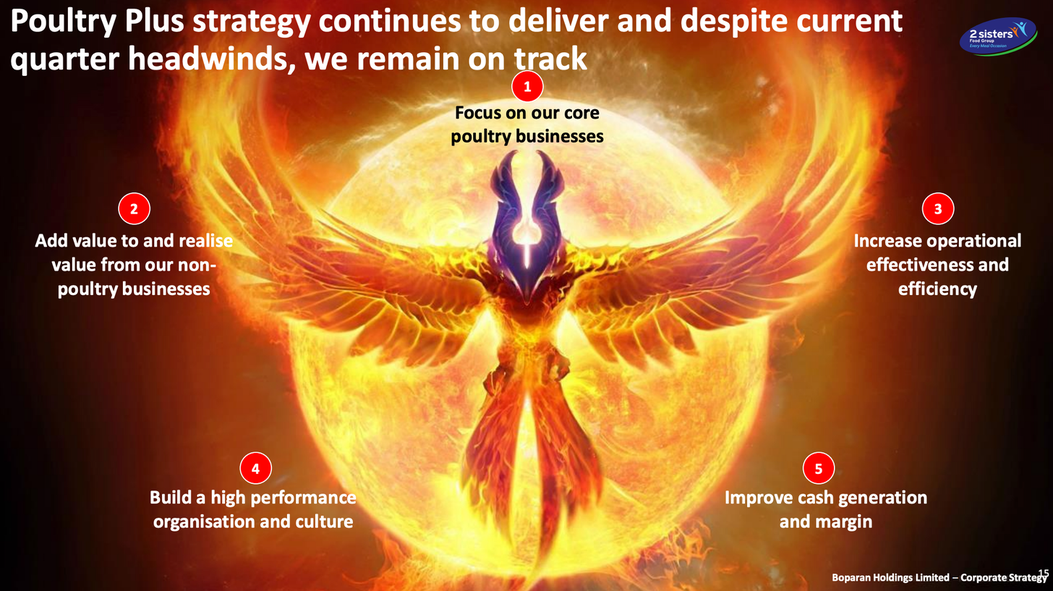 European secondary markets trended down this week. Only Real Estate enjoyed the smallest of bumps (+0.012). The dip in all other industries was led by Consumer Discretionary (-0.18 pts), Communication Services (-0.17 pts) and Financials (-0.16 pts).

To find out more about life and work at 9fin - click here.