Securing a graduate role with Frontline - Top tips from Jemma, a Brand Manager

Huge congratulations to Jemma for getting her role with Frontline! Here she tells us of her experience with the application process and offers a few tips for future applicants. Why did you choose Frontline and this role in particular?

I have a real interest in social inequality and doing something about it. I feel this role is quite different to anything else out there and it's also going to be quite rewarding seeing people get a role with The Frontline Organisation.

What was the toughest part of the application process? And your favourite part?

I really enjoyed the assessment day, there was a written task, a group task as well as a face to face interview. My favourite part was the face to face interview as the woman who interviewed me was lovely and had a really interesting background. In the group task we were given an actual situation that the Frontline often deal with and we had to come up with a solution as if we were in that situation but it was great to see what they do and the motivation behind it. The hardest part for me was the written task as I felt that even though I had prepared for it, I still felt like I was caught off guard.

I was surprised how long the application process took. There were quite a few stages including a video interview and the assessment centre. They also took a month to get back to me, which they did tell me in the interview, but it's still a long time to be waiting for a response.

What was the toughest question you faced at interview?

'How would I sell the role at my University?' 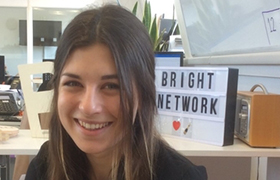