Working in Technology: IT & Software Development - Top tips from Sam and Seren

We caught up with Bright Network Alumni Sam and Seren, both of whom are several months into working at Citrix. Sam joined after graduating from York with a degree in Physics, and Seren is working at Citrix on an industrial placement. They answered a few questions we had about working at Citrix, and shared some advice that they would give to graduates or interns joining the firm. What have your first 3 months at Citrix as a graduate/intern consisted of?

After the initial two weeks of training, the team began finding us bug fixes; basic concepts that needed implementing and opportunities to produce automation that we all started to work on. Carrying out these tasks helped us find our way around the company code and gave us the opportunity to learn best practices from the senior members of the team that we were working with closely.

About half way through my first three months at Citrix, I was assigned the leader of my first “big feature” to be added to a Citrix product. Planning consisted of setting up meetings with team managers, architects and engineers from various teams within Citrix to ensure the new feature will work as intended. A big challenge was finding a time to get all these busy members of the Citrix team into one room together, especially when some are located in USA and there is only a few hours of overlapping working hours between our two time zones. It took about half a month but once the planning was done, it was time to form a small team of engineers and begin implementation. I have been working on this implementation for the remainder of my first 3 months at Citrix.

At Citrix, my first 3 months have consisted of training and getting to grips with the code base we are using. My first month mainly consisted of training with other interns and graduates. In this training, we learnt more about the company, the customers and the products. Also, I was able to get started on individual tasks straight away, doing this alongside the group training. During the first month, I had the opportunity to attend a Tech Fair where Citrix employees showcased new projects they had been working on using Citrix products. I was even give the opportunity to take part on one of these demos and record a voice-over for a video relating to that project.

After the group training was completed, I was given tasks within my domain team and within the first 3 months of working at Citrix I have been made Feature Lead of a substantial project for which I had to plan and carry out myself, and present this to my team. It is very exciting to have been given so much responsibility early on.

Has your first 3 months been what you expected?

I knew coming from a Physics background that I would have some catching up to do compared to those who studied Computer Science. However, I envisioned the gap in knowledge between the others and myself to be much larger than it actually was. This explains why companies like Citrix are happy to employ graduates from all STEM degrees and not just computer science.

One thing that I didn’t expect when working at Citrix was being able to get to work straight away. I was able to start working on tasks on my first day and I wasn’t expecting this as I thought I would have to do a lot of training first.

What has been your favourite part of the first 3 months?

Being assigned as the leader to produce a new “big feature” only a couple of months into my employment was a major highlight. I am happy that my superiors have entrusted me with this responsibility and I enjoy the sense of ownership I have had during the feature’s production from start to finish.

The two company BBQs were also a big plus of course.

My favourite parts of the first 3 months at Citrix has been meeting everyone in the office and getting involved in as many activities as possible. At the office everybody is so welcoming and friendly, I was able to settle into the rhythm of work a lot more quickly than I was expecting and this was largely to do with the people I work with. There are also lots of social groups organised by people within the company allowing you to interact with people in a different context.

What has been the most challenging part of the first 3 months?

The training week was a big strain on the brain. It is crucial when working on code for a specific product that you know how all the other connected products work and communicate with each other on at least a basic level. Therefore, there was a lot of information to take in but at the end of the two weeks; everyone was ready to begin work.

The most challenging part of the first 3 months has been learning new concepts within my domain as I am on a testing engineering team, whereas before my experience was predominantly in the development side. Although this has been the most challenging part I would also say that it has been a really positive experience as the reason I wanted to do an internship was to learn more about software engineering in practice within a company.

Has there been anything that surprised you about Citrix?

I was surprised that Citrix are happy for employees to work when they want and how they want, as long as the work gets done. It’s very easy for a company to offer flexible working hours but still pressure its employees to work in the office 9-5. However, that isn’t felt here at Citrix. They are happy for you to work at home if you are expecting a delivery, or have a 3 hour break if you have an appointment. There is also no pressure on employees to avoid the pool table unless you are on lunch; if you need to clear your head or talk with another engineer, Citrix are happy for you to talk over a game of pool or table tennis. There is even an ongoing pool-competition within the company!

One thing that surprised me about working at Citrix is that as an intern, I am supported very closely and I am able to take my training into any direction I would like, allowing personal development, whilst achieving company goals.

What are you most looking forward to doing in the next 3 months?

I’m looking forward to finishing my first “big feature” and seeing it in use by all of Citrix’s customers. I’m intrigued to see how successful it is and to find out how I could have done things better. I am also going to begin planning a fundraising event within Citrix, which will make use of the two “Global Days of Impact” that each Citrix employee gets per year.

I am looking forward to growing more as a person within the company and improving my skills. I look forward to more training tailored to me and at my own pace.

If you could give a new graduate/intern any advice for their first 3 months, what would it be?

No question is a stupid question so ask as many as you can. When someone is explaining how their code/product works, it’s easy for them to forget how little a new starter knows! Another approach I also tried and recommend is to build your own “company dictionary”. For the first month or so I walked around with a notepad; if there was any terminology I didn’t understand I wrote it down and researched it when I got back to my desk.

Advice I would give to another intern is: 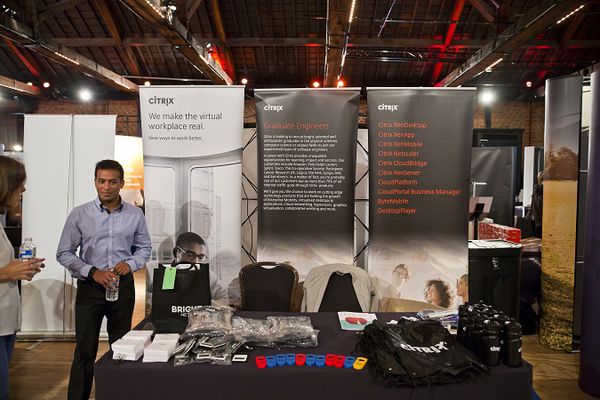