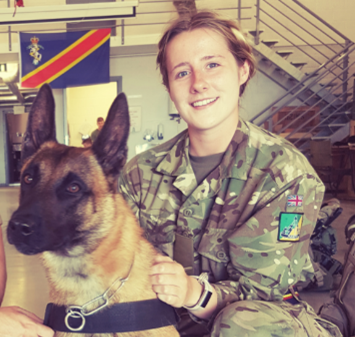 Tell us about your role and what you do

I am a qualified aircraft maintenance supervisor with significant experience on rotary wing and fixed wing Unmanned Aircraft Systems within Army Aviation; my role is to primarily ensure that all preventive and corrective maintenance, and associated paperwork is completed safely and accurately in order to uphold the paramount air safety values within the aviation environment. Along with this my role consists of mentoring subordinates within my trade to reinforce their existing knowledge with the experience I have obtained over my time in the Army Aviation world.

Why did you join the Army to pursue a STEM career?

During my time in secondary school I was particularly interested in all the STEM subjects, however most prevalently Physics and Biology. From this point onwards I found myself very inquisitive about multiple topics within these two subjects and was persistently questioning things on how and why they worked in the way that they do.  It was this inquisitiveness that led me to pursue a career in aviation, as since a young age I have always been in awe of anything that has been engineered to fly and wished to know exactly how everything operated. The decision to pursue a military aviation engineering career stemmed from my Family background, as several members of my immediate Family have been involved within STEM specific trades within the military. It was their stories and positive accounts of their time within the Army that had definitely impacted my final decision to apply to join.

How did you find initial training?

Initial Training for me was an incredible experience as I joined at the rather young age of 16. Despite having to adapt rather quickly to very unfamiliar routines and regimes, I found that the exposure to a highly disciplined and physically challenging environment allowed me to build confidence in myself at such a young age which furthermore benefitted me in day to day life. Along with this it also allowed me to identify the fact I truly enjoy long distance running!

What is something that has surprised you along your journey?

The most significant thing that has surprised me throughout my career so far is learning that    if you truly set your mind on a goal, and put in the effort and hard work to achieve this goal then you will achieve it no doubt. Adopting the mindset of ‘mind over matter’ has also helped me to persevere through challenging situations and feel accomplished knowing I overcame these difficult encounters.

What are some of the ways that the Army has trained and prepared you for your role?

The Army has instilled in me that leadership and organisational skills are almost paramount in any job role, however specifically to that of an Aircraft Technician. The ability to map out a specific plan on how you are going to tackle any faults that may arise on aircraft and how you will assign your manpower to rectify said faults, is a skill that is definitely required in this job role. The exposure we get as technicians at the School of Army Aeronautical Engineering to faults and scenarios is second to none, enhancing our ability to think ahead and decision make before we have even progressed on into the field Army. I personally believe the quality and delivery of the training I received at SAAE has allowed me to successfully progress in my career and deliver the knowledge I have obtained over time to my subordinates.

What other opportunities have you got to experience?

Throughout my mere 6 years in the Army I have been given the opportunity to represent the REME in several cross country and duathlon competitions which furthermore has allowed me to sustain my physical fitness. There have also been numerous opportunities for adventure training too, and so far I have been caving, static-line parachute jumping, trekking, skiing and kayaking; having the option to attend subsidised events such as these is a truly unique part of the Army, and something that I personally believe is one of the most rewarding parts of being in the military. Along with this I have deployed to Estonia with my first unit post phase two training, which allowed me to experience living temporarily in a new country I hadn’t previously visited and meet members of the Estonian Military of the same job role as myself.

What do you think makes training to be an Aircraft Technician in the Army different?

I think that the greatest difference between the training we receive to be an Aircraft Technician within the military as opposed to in the civilian world is that you possess the feeling of belonging. As our training can vary from anywhere between 12 to 18 months, this allows you to build strong friendships with your colleagues and these friendships continue for the remainder of your career and beyond. The opportunities and rewards that exist during training encourage enthusiasm within our job role and recognise the hard work of individuals. This additionally promotes the quality of engineers that will progress on into the field Army.

What advice would you give to anyone who is thinking of joining the Army to build a career in STEM?

Personally, as I mentioned previously, adopting the ‘mind over matter’ attitude will allow you to maintain the mental stamina you will require to achieve your goals within the STEM environment. STEM related careers are, in my opinion, one of the most rewarding career channels you could follow, even though they are indeed a challenge. I would say that if you have a genuine interest in any of the STEM subjects then you will flourish in the environment that the Army harnesses for this type of career. The ability to encourage and promote this career path to aspiring young members of the population as a representative is also a highly rewarding feeling- knowing you are going to give those individuals an insight into where they could be heading in the future.

What is the working culture like in the Army?

The working culture within the Army is one that is most certainly unique to the Army alone; this is because every single member is promoting optimum team cohesion and seems to withhold the splendid gift of repartee or the well renown ‘banter’ characteristic which certainly creates an exuberant working environment. The greatest part of the working culture for me personally is feeling part of a very inclusive, close-knit team that you feel comfortable sharing potential issues with and know that you will be supported in every type of situation.

→
Next:
Diversity & Inclusion at WFW