See your career at Specsavers: Rosie’s career journey from optical assistant to working in our Retail Support Team

When Rosie was 18 years old, she hit a crossroad and had no idea what she wanted to do in the future. All her friends were about to head off to university, but Rosie just didn’t feel like this was the right path for her to take. While completing her A Levels she had worked two part-time roles – a Saturday job in Boots Opticians as an optical assistant and an evening job working in a bar – this gave Rosie the taste of earning her own money, so she made the spontaneous decision to pack her bags and head off to Central London like Paddington Bear with his marmalade sandwiches to pursue a full-time career as an optical assistant at Boots. She’s now worked in optics for 12 years!

Rosie spent three years with Boots Opticians learning all there is to know about optics and contact lenses and her passion in this area grew. During her time at Boots she would meet sales representatives from the contact lens companies to do training or business development activities and she decided it was time for her next career move – Rosie loved the idea of being out on the road and meeting new people. One day she attended a contact lens event that was being run by CooperVision and took the plunge by going up to the Managing Director of the business and asking for a job.

‘I look back and think god that was really assertive of me actually and maybe a little bit arrogant as well, but he seemed to quite like the approach and long story, short I went for an interview and got a job as a Junior Sales Representative.’

Rosie stayed with CooperVision nearing five years, working her way up to Senior Business Development Manager where Specsavers happened to be one of her clients. Specsavers became one of her favourite clients to work with, she’d built up a lot of relationships with our Partners and colleagues over time so when she was approached by us with a job opportunity to work in our Contact Lens support office team, she jumped at it.

Rosie started her role with Specsavers as Contact Lens Portfolio Manager for UK. Ireland and Spain in January 2017. In this role Rosie has delivered several projects, seminars, partner meetings, product launches and incentives.

‘This role was new to me, but I quickly learnt on the job. Specsavers have really supported my development and I’ve received lots of mentorship along the way.’

In March 2021 Rosie started to get itchy feet, she missed being out in thick of things on the shop floors, so she sat down with her line manager at the time to discuss her next move and that’s when her journey in the Retail Support Team (RST) began.

Rosie started her time in the RST as a secondment / part-time role over six months alongside her contact lens role which gave her the opportunity to see if this was the right move for her.

‘Doing both roles was no small task, but Specsavers supported me incredibly well in terms of managing my workload.’ 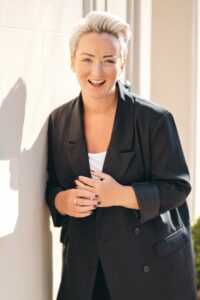 After the six months Rosie decided the RST would be her new home. Rosie is now the Regional Relationship Manager (RRM) in North Yorkshire looking after 28 stores.

‘If you’re not sure what it is that you want to potentially do – working in the RST gives you such a broad range, there isn’t a part of the business that you don’t get involved with or don’t understand a little bit more of, it’s so wide reaching. It gives you so many different networks and relationships – I love it. I’ve always promised myself that whenever I get to a day that I stop challenging myself or stop learning in my role then it’s time to make a change and since joining the RST the learning hasn’t stopped – I’m learning something new every hour.’

‘I don’t think I have ever worked in a team where everyone is so collaborative. When I’ve worked in sales teams in the past it can be a bit competitive whereas it’s not like that in the RST, you can pick up the phone to someone who works in Scotland, Ireland, Cornwall or wherever and everyone is working towards the same goals. We all share and learn from each other which is great. It’s a really lovely environment to work in.’

We asked Rosie what she would say to someone who was thinking about working at Specsavers and she said:

‘When I look back at my 18-year-old self I can’t believe how far I’ve come. I’ve found a job that I enjoy going to every day and that I want to get out of bed for in the mornings. Specsavers as a business, in my opinion, are second to none to work for. The culture here is inspirational. Everyone’s door is open, even if it’s a virtual door and it’s just a really fun place to work.’

‘I feel really passionate about that 17/18-year-old me who had no idea what she wanted to do and felt pressured that the whole world was going off to achieve these great things at university and it just wasn’t for me. I really believe that everything happens for a reason and if you work hard, show determination, listen, and learn and take risks – you can do anything you want to do. Never stop being curious and never stop asking questions.’

If you’re looking for your next career move or just starting out on your career journey and want to join the Specsavers family check out the latest opportunities at Specsavers here.