Huge congratulations to Yousef who secured a Technology Risk role with PwC. We recently caught up with him to discuss his application to PwC and what advice he would give to other Bright Network members looking to apply to jobs. Why did you choose the role and PwC in particular?

In my final year at university, I applied for a variety of roles spanning different industries, having been uncertain about what I wanted to do. I didn't get anywhere. Having put some thought into what I wanted to do, I became convinced that my interests lie in technology.​

I chose the Technology Risk role at PwC for a number of reasons, including the diversity of the work that the role entails, and the potential directions that I can steer my career towards after accumulating some experience. I wanted to join PwC not only to gain invaluable experience from working in a client-facing role at one of the biggest professional services firms in the world, but also because the technology department is relatively new, giving me the opportunity to grow with it. It is very easy to view PwC mainly as an accounting firm, but over the years, its work in technology has grown and has become one of the key elements of its strategy for the present and future!​

What was the toughest part of the application process? And your favourite part?​

The toughest part of the application process was the written exercise at the assessment centre, where the time pressure turned a straight-forward task into a very challenging one; I thought that I had failed it! My favourite part was the final interview because it felt more like a chat than an interview.​

Were you surprised by anything in the process?​

I was surprised by the speed of progression from one stage of the process to the next with PwC. In my experience, lots of companies have very thorough application processes but there is often quite some time to wait (with plenty of nail biting!) between each stage, or in some cases before you even get an update about the status of your application. With PwC, I have found the process to be both thorough and extremely efficient. My journey from application to offer with PwC took about 7 weeks, which I was very impressed with, especially because communication and scheduling was rapid, and most of the waiting involved preparing for the next stage.​

What three top tips would you give to BN members looking to follow in your footsteps?​

1) Are you still undecided about your career path?​ Avoid looking at others.

It is often easy to look at what others are doing and to "benchmark" their achievements (career and salary) to form an idea of where you should be, or what you should be targeting. In my opinion, all that does is cloud your judgement and divert your attention away from what you might actually want to do. So whilst your friends or acquaintances might be doing well, be happy for them but do not use their achievements as indicators of where you should be. Instead, really think about where your interests lie to channel your thoughts in a more productive way, hopefully allowing you to narrow down your options to roles that better suit you!​

Don't try to conceal or change your personality to suit a company. Instead, be yourself. The last thing you want to do is to give off the impression that you are a dishonest person, or to get an offer to work at a company filled with people you probably won't get along with. Instead, keep your values at your core and act with integrity; that should hopefully take you a long way.​

3) Always try to remember that we are all human (unless robots take over... in which case, ignore this absolutely useless tip).​

Although preparation is essential, overpreparation might give off the impression that you're robotic and lack personality. You might have been advised to use the STAR framework when answering certain types of interview questions. Don't take this too literally by memorising scripts and reciting them from memory, word for word. Take a step back and think about what the STAR framework was actually designed to help with. In my opinion, that would be structure and content.​

What was the toughest question you faced at interview?​

The interview was quite relaxed and whilst I had to be well prepared in order to answer most of the questions, I felt that the interviewer was not trying to catch me out.

One of the harder questions that I was asked was a follow up question to why I wanted to do the role that I had applied for. I felt that I had sufficiently, and convincingly, covered the initial question and was therefore surprised by the follow up. To answer it, I tried to convince the interviewer that I was absolutely sure about what I was going into by providing examples of the type of work that I expected to be involved in and by emphasising how my skills will help me on the job.

If you feel that you've been caught off guard in an interview having been asked a difficult question that you might not have prepared for or thought well enough about, don't panic. Take a moment to gather your thoughts and don't be tempted to rush to an answer. It might help to think about why the interviewer might have asked that question to help direct your answer in a way that will impress them! Keep it concise and direct, and avoid waffling too much. And hopefully you'll land an offer for that dream job! 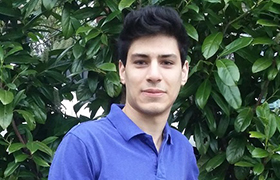