After spending the day at Bright Network Women in Leadership, Harriet won the community award for her past achievements, which she described as “an amazing surprise”. We caught up with her to hear about her work experience up to that point, particularly the summer internship that she recently completed with Lloyds Banking Group, and what she thought about the event. Can you explain a bit more about exactly what your role at Lloyds entailed?

My role was to support the Finance Director by working within the Finance Operations Business Management team. The work was more creative than I had expected which luckily suited me, and involved writing communications on behalf of the FD, organising events and publishing campaigns to help meet departmental targets for the second half of the year. I was given more responsibility than I thought I would which meant I got the chance to have hands on experience throughout the whole 10 weeks. Various colleagues set projects for me so I felt like a very valued member of the team, for example running community calls from start to finish and analysing risk data and putting my findings into a published report.

What attracted you initially to the internship?

I wanted experience working within a Financial organisation and so I applied to the Lloyds Scholars scheme prior to my first year of university. The scholars programme offers two ten-week internships throughout your degree and so I applied for Finance as my first. I thought a Finance internship would provide me with the basic understanding of how such an organisation is run behind the scenes, as in the future I would like a role working with clients and I think it is important to have good background knowledge prior to this.

What did you learn working at Lloyds Banking Group?

The phrase ‘if you don’t ask, you don’t get’ was something I needed to follow in order to gain the most from my internship. I was given lots of work and projects in the first few weeks but after a while as projects finished I had less to do. Initially I thought that if I was needed then one of the team would ask me to help them, but I soon learnt that colleagues would be unaware of my workload unless I told them. During any quieter times, I would ask for more work from my managers and they easily found things for me to get involved with. This meant I was consistently busy throughout my internship and I could reduce some of their workload too which they were grateful for!

Has it influenced your thinking on what career path you might want to pursue in the future?

My managers were very willing in helping me spend time with other teams and put me in contact with colleagues from other departments so that I could gain insight into their work. The risk work that the Audit teams do appealed to me so I am going to look further into that as a career path.

Have you got some top tips for members looking to follow in your footsteps?

Apply early. Even if a summer or holiday break seems ages away always look at what opportunities for internships, scholarships or placements were available at an organisation over the past few years so you can be aware of what to look out for in the future. Spend time looking at the options available and keep your eye open for application dates and deadlines so you don’t miss out. Also, I would recommend talking to as many people and teams as possible on an internship as this may open doors for you and you’ll learn things you may not have gone looking for.

​What did you learn from the Women in Leadership event?

The Women in Leadership event was very empowering and informative. As well as speaking to and hearing from women who have made strong careers for themselves, it was a great opportunity to network with other students in the same position as me. The event was well organised and I would highly recommend it! 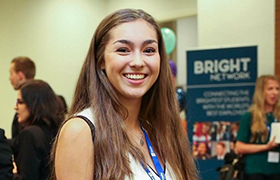