Graduate insight into securing an internship with Nomura

After attending our annual Bright Network Festival, Lucio applied for and secured a Summer Internship at Nomura in the Investment Banking Division. We recently caught up with Lucio, currently studying Finance and Investment, and asked him how he found the whole application process as well as if he has any advice for his fellow members. Here is what he had to say.

‘This is very exciting for me because I remember reading these success stories a couple of years ago when I was looking into how to break into investment banking.  These stories provided me with a great insight and the volume of these success stories made me realise that getting involved with Bright Network would be a good step. It is really quite overwhelming that I get to be a success story now!’ Why did you choose this company?

Nomura is an Asia-headquartered investment bank with a global presence.  With Asia being an area of the world that is growing most rapidly, I believe Nomura will place me on a great career path. Nomura conducts a large variety of transactions and would give me the exposure I need to advance my knowledge of the industry. It is also more nimble than its competitors and this would give me more exposure to transactions and access to senior bankers. In addition, Nomura also has a fantastic mentorship model that is very appealing and a training programme to equip me with the right knowledge for a careering in banking. All of this is without even mentioning how much I like the people at the bank; every interaction I had with them was a pleasant one as they were all very relaxed and easy to talk to.

Funnily enough, when I was around 16 I was actually trying to get into engineering, so I did a work experience placement at Sunseeker, a luxury yacht manufacturing company. By a bout of coincidence which I am now thankful for, during my placement, it was announced that China’s Dalian Wanda Group (a multinational conglomerate) made a £320m bid to buy Sunseeker.

At the time, I had no idea that such large transactions were possible, and I definitely didn’t understand Dalian Wanda’s intentions, so my curiosity took over and I immediately researched it, only to shortly stumble into Investment Banking. At this point, I realised that this ‘large’ transaction was only the tip of the iceberg. My career aspirations quickly diverged and my desire to be in the Investment Banking industry strengthened with each Bright Network and Insight event that I attended. Now that I look back, however; I realised that not only is the industry very interesting, but I can also do a lot of good with the companies that I will be working with in the future. So doing an internship for a company like Nomura is an amazing opportunity that I am very grateful for.

What did the application process involve? Did you have a favourite and least favourite part?

I actually found the application process quite easy compared to others. It was the standard online application for which you had to attach your CV and provide a 200 words response to three questions. After this point (and subject to performing well in the follow-up online tests) you’d go to a first-round telephone interview - competency based, but depending upon your background they may throw in some technical questions. Nevertheless, I am really happy because during the whole recruitment process they responded really quickly, which is rare for investment banks since it is so competitive. I heard back from them in a few days that I was successful.

Then there was the assessment centre, which comprised of a technical case study. We were looking at the valuation of the company from an acquisition that Nomura advised on. Following this, we had to speak about our findings and results with an Analyst. I found this part quite tricky because the Analyst asked me a few difficult questions to see how well I can justify my points, reason and withstand the pressure.

Then I had three back to back interviews with senior members of the bank; two Managing Directors and one Vice president, and this was all competency based. The questions were based on my motivations and experiences thus far. But if you want an internship there, you have to go beyond the basics and make sure that they like you which is perhaps the most important and overlooked part; you have to either talk about your interest, their interest, or both if you have something in common! During my interview, I spoke about the upcoming Rugby World Cup in Tokyo, my passion for combating climate change and my recent adventure in Costa Rica for a volunteering programme. Eventually, it became about my origin in the Republic of Moldova, of which there are very, very few individuals in the UK, only to discover that one of the Managing Director’s colleagues was from Moldova, so she put me in touch immediately, which for me was a funny turn of events. My point is that beyond preparing for the basic questions that you are expected to answer, you must be able to carry a conversation about topics-like the ones just outlined. That is how you differentiate yourself and make them like you!

What top three tips would you give to other students looking to follow in your footsteps?

Do you have a pre-interview ritual or lucky charm?

I wouldn’t call it a ritual but it’s definitely something I do regularly. Just taking an hour before the interview to first look over my interview notes and to try and retain all of the information from my research of the company is very important. For the second half of that hour, I would just try to put the notes aside, or if it’s face-to-face just try to relax, don’t do anything mentally taxing and think positively. Confidence is also key.  If you doubt yourself, the interviewer will see that and your passion will not shine through. 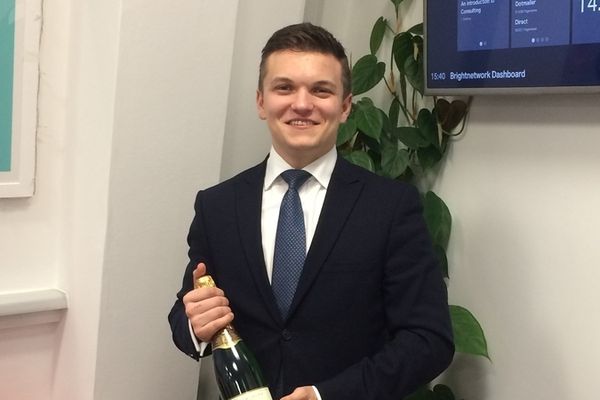