Securing a graduate role with Vodafone - Top tips from Sam

Huge congratulations to University of Leicester graduate Sam Cranswick who secured a place on Vodafone's Discover graduate programme. We caught up with him a few weeks before the programme began to discuss his application process to Vodafone and how he felt Bright Network had helped him throughout. Whilst I had heard of Vodafone I had never seriously considered working for them. However, over the past few years I have kept a semi-regular correspondence with Bright Network and with Ben Triggs in particular. Ben knew what sort of role I was looking for and saw that I was a good fit for a graduate role with Vodafone. He rang me up to make me aware that Bright Network were partnering with Vodafone to help them find candidates for their different streams. Following this phone-call I researched Vodafone online where I came across a number of different graduate roles that strongly appealed to me. Furthermore, the company’s values are very much aligned with my own. Bright Network made me aware of the opportunities available to me at Vodafone and upon further research into the company I became aware that the Vodafone brand, their culture of work, the employee benefits and the graduate schemes with them all appealed to me immensely. Who wouldn’t want to work for one of the world’s largest telecommunications company?

Ben told me in our phone-call to apply to an assessment day Vodafone was running. Apart from sending my CV and talked to Ben on the phone the day was the only stage to the application. The event took place at the Vodafone Paddington office and the assessors spent the first hour familiarising us with the graduate scheme explaining that the scheme was rotational with an extremely broad scope for the work that you could get up to on it. Following this there was a speed networking session where us applicants were introduced to the different departments which we could potentially work in during the scheme. Every single Vodafone employee I met was an absolute pleasure to speak to, they were all incredibly friendly and open about the work they did and the work that I would get to do with them. Furthermore, the breadth of the graduate scheme stunned me. I’m working in Vodafone’s legal sector examining the firm’s Brexit strategy for my first placement but I then have the possibility to spend my next placement in jobs ranging from HR to digital transformation and more. Following this speed networking session, I had a couple of interviews which did not feel overly formal or unnerving. Both interviews were very conversational in tone which helped relax me throughout. Overall, it was a thoroughly enjoyable day and a few days later I got offered a place on the graduate scheme!

How has Bright Network helped you with your career so far?

Bright Network helped me throughout my time at university and with securing internships and this graduate scheme. I went to the Bright Network Festival 2 years in a row and found it to be a great event whether you head into it knowing exactly who you’re going to speak to or even if you head in unsure of what you want to do or which firms you want to talk to. Going to the Festival in my first year I only really knew that I didn’t want to do law as a career. It was at the Festival that I met Next Jump, the company that I interned with last summer. The Next Jump representative blew me away in our one on one chat at the Festival with talk of the company’s opportunities for students and their dynamic and vibrant working culture. I found Bright Network’s smaller events similarly useful such as their more intimate “How to Get Into: Commercial Law” event. These offered a different but equally valuable experience to that of the Festival. Finally, the phone-calls, the emails and the personal relationships which I’ve developed with Bright Network employees have all served me well, especially as because of them I was made aware of this graduate scheme with Vodafone!

What three tips would you give to your fellow Bright Network members looking to follow in your footsteps?

What was the hardest interview question you’ve faced?

What was the most innovative thing you’ve done? 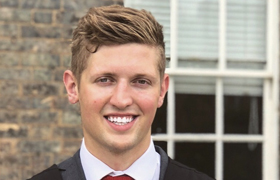